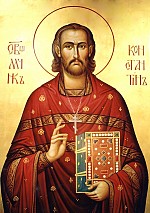 In 1896, deacon Stefan Bogoyavlensky of the Dormition church in Ekaterinburg had a son who was named Konstantin at baptism.

As many children from ecclesiastical families, Konstantin followed his father's steps. At the age of ten he was sent to the theological school of Ekaterinburg. At first, the studies did not come easy to him. Today it is difficult for us to know the reasons for his poor progress. Whether his poor health or something else was the cause, but in the lists of students at the theological school compiled after the annual examinations for 1907-1908 school year, it is marked that Konstantin Bogoyavlensky of the second grade has to retake Russian (a written exam), Latin, and arithmetic’s. Re-examination was successful, his studies continued, and in 1911, having graduated from the school, Konstantin was transferred to the first class of seminary in the city of Perm, to the second category. While studying there, he lived in the Seminary's Dormitory located on the Monastery street. In the spring of 1917, Konstantin's studies were about to end. He had entered the seminary among the second-category students, but he graduated from the seminary as one of the first category students and was awarded the title of a theological seminary's student. By this time he was already ordained a priest and appointed to the church at Merkushino village of Verkhoturye district.

In all the Orthodox world this village is known as the place of appearance of the imperishable relics of one of the most glorious Russian saints -- the righteous Symeon of Verkhoturye, a miracle-worker, whose name is honored far beyond the borders of Ural and Siberia. The village was founded in 1620 as a staging post on Siberian trade route. Due to the wonderful natural landscape with which the cathedral blended so harmoniously, Merkushino in the begining of the XX century could be called one of the most beautiful villages of Ural. (Two churches were built in the village: a small one in honor of saint righteous Symeon; under its altar was the tomb of the saint with a healing waterspring. The other one was a magnificent church with three cathedras in honor of Archangel Michael; the churches were connected with a sheltered brick gallery).
After graduating from the seminary in April of 1917, Fr. Konstantin immediately went to the place of his appointment. In May of this year in the church records of Michael-the-Archangel church of Merkushino village, already appear new records made by the hand of the young priest (infant baptismal records, for example).

Fr. Konstantin's service began at a restless time; the country was on the verge of the revolution. After the onset of the new power, a time of hard trials came for Russia; rebellions broke out in different regions. Serious resistance to the newly establishing regime was forming in the Verkhoturye district in 1918. The memoirs of those who took part in the civil war tell that peasants and landowners "were collecting weapons, forging spears and pikes in the forges; molded bullets for hunting rifles. They proclaimed a mobilization of horses, people, and military exercises." In July of 1918 "an uprising against the Soviet power was organized. Seven districts were involved in the uprising: Merkushinsky, Krasnogorsky, Deryabinsky, Otradnovsky, and three Makhnevsvsky districts. On July 3rd, a march to Verkhoturye was organized, with all the population participating: some people with axes, some people totally weaponless." The memoirs sometimes mention that the rebels found support from the clergy.

After the suppression of the uprising, a new wave of violence went over all of the Verkhoturye district. In Merkushino village a "demonstrative" (according to the inhabitants) execution of the priest and churchwarden was performed. While they were being brought from the church to the site of execution, beyond the village cemetery, Fr. Konstantin walked and chanted the funeral service for himself all along the way. They were made to dig graves for themselves, and then they were shot down in full view of the country folk who had been forcedly gathered there.

Just like in any other church, in Merkushino there were two church records: one of them had the records of such sacraments as baptism and wedding, and the other one had the records of funeral and memorial services. Just on July 5th of 1918, a record was made by Fr. Konstantin in the first book. Already on July 17th, the second book contained a record that "the priest of this church, Konstantin son of Stefan Bogoyavlensky" had a burial service sung for him and is buried in the church cemetery. The cause of death is "shooting down." The date of death is also indicated: July 14th; in the "years of the reposed one" column it says "22." The funeral service over the neomartyr was performed by priest Aleksey Khlynov, deacon Feodor Alekseyev, and precentor Aleksandr Gashev. July 14th was a Sunday in 1918.

A list of names of the murdered servants of God has been preserved from those times. The majority among them are priests, deacons, and monks. Today they are glorified among the holy new martyrs and confessors of Russia. Since this book was printed typographically, there is every reason to believe that it was compiled for the purpose of distribution through all the Ural, and possibly not just the Ural, churches. Number 31 has: "Konstantine Bogoyavlensky, Merkushinskoye village, Verkh., shot down on July 14th, village of Merkush."

Yet, the churches where commemoration of the new martyr could be done were becoming fewer and fewer in number in Russia. In Merkushino during the years of the Soviet power, the harmonious architectural ensemble of the two churches and the connecting gallery had been destroyed: Michael-the-Archangel cathedral was blown up, the gallery was stripped for its bricks; St. Symeon's church in the beginning was turned into a gym, and later was abandoned and was slowly demolishing. The village itself, devoid of spiritual support, was gradually deserted and was slowly dying. The inhabitants, captured by the vortex of the "accelerated five-year-plans" have forgotten about the killed priest.

But the Lord had mercy on the Siberian land and revealed yet another saint. In 1996 in Merkushino, a metochion of Novo-Tikhvinsky women's monastery was founded; gradually St. Symeon's church was restored, and in May of 2001 a second laying of Michael-the-Archangel church was done on the preserved foundation. A year after the laying, on May 31st, 2002, at the construction works, imperishable relics of an unknown priest were discovered by the left St. Dmitri's side-altar of the church which was was being restored. As it turned out later, he was killed by a shooting into the head. Here also a small Gospel book in a metal framework was found, printed in the Moscow synodal publishing house in 1893. The first page had a hand record: "4/V, 1917, c. Perm," "Priest Konstantin Bogoyavlensk." As the result of the graphological examination, it was possible to determine that the record was done by priest Konstantin Bogoyavlensky. That is when the gathering of information that made it possible to learn about this new saint of God began.

Medical assessors had been invited for the investigation: the head of the regional bureau of docimasy N.I. Nevolin and the manager of the medical-criminalistic department of the bureau, A.V. Nikitin. In accordance with the experts' conclusion, the burial was performed no less than 40 and no more than 85 years ago; the remains belong to a priest killed by a shot in the head. The absence of significant demolition of the cranium bones led to the possibility to suppose that the shot was made from the pistol of the "Mauser" system or from a pistol of the "Revolver" system. The height of the killed one was 176-178 cm, he had light-brown, slightly wavy hair, and a small beard.
It is needed to note that during the construction works over the restoration of the Michael-the-Archangel church, several dozens of burial places had been discovered; among them several priestly interments near the altar. However, not a single one of them had the remains preserved to such degree of integrity; they would often be only bones. Among the buried priests not a single one was killed by a shot in the head.
It is remarkable that literally a month and a half after the discovery of the relics, hieromartyr Konstantin Bogoyavlensky was canonized with the Neomartyrs by the Pontifical Convention of the Russian Orthodox Church. (The decision of the Holy Synod from 15.07.2002).

The icon and story of Holy Martyr Konstantin of Merkushino are reprinted courtesy of The Novo-Tikhvin Womens Monastery, Ekerinburg, Russia.