The Canonization of Russia's New Martyrs

The following is an article written for the announcement of the glorification of the Holy New Martyrs and Confessors of Russia on 1 November n.s. / 19 October o.s. 1981

... I saw under the altar the souls of them that were slain for the word of God and for the testimony which they held ... And white robes were given unto every one of them. (Rev. 6~11)

As the thousandth anniversary of Russia's Baptism draws near (1988), increasing attention is being given, both in the awakening Orthodox soul of Russia itself, and in the Orthodox of the diaspora, to the heroic struggle of the most recent and most numerous category of Russian saints--the New Martyrs and Confessors of the 20th century. In answer to numerous requests from the faithful, including moving appeals from within enslaved Russia (by Pr. Dimity Dudko, Pr. Gleb Yakunin, and others), the Sober of Bishops of the Russian Church Outside of Russia has resolved to perform the solemn glorification (canonization) of the New Martyrs and Confessors of Russia on Sunday, October 19/ November 1 of this year, A decree has been issued concerning preparation for this solemnity (see below), and Metropolitan Philter, the Chief Hierarch Philaret, has written a special Epistle on this subject to all members of the Russian Church Outside of Russia

The Meaning of Canonization

Canonization means "cataloging" the saints In earliest times the Church recognized the martyrdom of one of its members by immediately venerating him. They saw no need for any investigation for proof of their sainthood. They lived among them and proved their faith by being martyred in front of everyone. 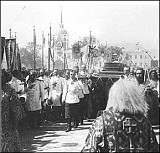 In a similar way the Greek Church, in venerating their new martyrs, those who suffered during the Turkish yoke, did not need proof of their sainthood. The Turkish empire required people belonging to a different faith to dress differently so they could be easily identified, Perhaps because of this or to maintain their possessions, or to advance in position, many of the Creeks converted to Islam. Quite a large number of these converts, however, being bothered by their conscience, went to the authorities to denounce their alliance with Islam and their return to Orthodoxy, knowing full well that they would be prosecuted and executed immediately. The Orthodox community, knowing what was
happening, prayed in a nearby church and sent some of their people to witness the martyrdom of one of these people. Immediately after the execution these witnesses ran back to the church to inform the rest of the community. In this way the martyred one was immediately glorified.

Throughout the early history and growth of Orthodoxy, some misconceptions regarding glorification of the saints have entered the community, Therefore, in the 5th century, the Church of Carthage in one local council introduced a law that people who are to be venerated as saints should first be investigated and recognized by the Council. From that time has come the procedure of canonization. ("Orthodox Way", June 28, 1981)
The Epistle of Metropolitan Philaret

"Although in the history of the Church of Christ we see examples of martyrdom in all periods of her existence, still, before the Russian Revolution the exploit of martyrdom was something primarily of the first centuries of Christianity., when paganism strove by iron and blood to annihilate the Holy Church.

"We see something else today. With the appearance and consolidation of God-fighting communism in Russia, there began a persecution of the faith unheard of in its cruelty and broad scale. As one Church writer has defined it, Orthodox Russia has been on Golgotha, and the Russian Church on the Cross ... The Russian Church and people have given an uncounted multitude of cases of the martyric endurance of persecutions and death for faith in Christ... not merely hundreds or thousands, but millions of sufferers for faith--an unheard of and shocking phenomenon!

"But at the same time the Russian land is being purified of this defilement by the sacred blood of the New Martyrs who have suffered for faith and righteousness. The Russian land has been abundantly watered by this blood--watered, sanctified, and cleansed from the senselessness of the atheists and God-fighters! ....

"The day draws near of the canonization-glorification of the uncounted choir of martyrs and confessors of the faith which the Russian Church and people have manifested to the world. This will be a day of the greatest solemnity for the Orthodox faith--not only in Russia and in the Russian diaspora, but in the whole World, wherever there are • faithful children of the Orthodox Church....

"Great and numerous is the choir of the Russian New Martyrs. It is headed first of all by the sacred names of His Holiness, Patriarch Tikhon, the murdered Metropolitans Vladimir and Benjamin; Metropolitan Vladimir occupies a special place of honor in it as the first martyr who placed the beginning of this glorious choir. At the same time, an entirely special place in the choir of the New Martyrs is taken by the Royal Family, headed by the Tsar-martyr, Emperor Nicolas Alexandrovich, who once said: "If for the salvation of Russia a sacrifice is needed, I will be this sacrifice."

Members of the Russian Church Outside of Russia! We are preparing for a great solemnity - a solemnity not only for the Russian Orthodox Church, but also for the entire Ecumenical Church, because the whole Orthodox Church in all its parts is one and lives a single spiritual life. Let this solemnity of the Orthodox faith and the beauty of the exploit of martyrdom be not only a general Church solemnity, but also a personal solemnity for each of us! We call all members of the Church Outside of Russia to prepare for it with increased prayer, confession, and communion of the Holy Mysteries of Christ, so that our whole Church with one mouth and one heart might glorify Him from Whom comes every good gift and every perfect gift--(God Who is wondrous in His saints!" (Excerpt from Metropolitan Philaret's Epistle, trans. from "Orthodox Russia" 6/14/81)

Preparation for the Glorification

At a meeting of the Synod of Bishops in May of this year, Archbishop Anthony of San Francisco and Western America gave a report with a proposal for the liturgical preparation for the approaching Glorification of the New Martyrs and Confessors of Russia. The following is a summary of the Ukase issued by the Sober on May 1/14, 1981 based on the archbishop's proposal:

On June 15/28, on the Sunday of All Russian Saints, following the Liturgy a molieben (special prayer service) should be served to all the saints of Russia at the end of which a special petition is to be added asking God's help for the Council of Bishops in their work toward glorification of the New Russian Martyrs and Confessors.

On July 1,/17, for the last time, the clergy and parishioners are called to have a requiem service (pannikhida) for the Royal Martyrs and for all their faithful servants including those who were martyred the following day at Alapaev.

With the beginning of the new Church calendar, on September 1/14, 1981, all parishes which have daily services are to serve a memorial Litany after the Liturgy on all days except Sundays and Great Feast Days. All churches of the Russian Orthodox Church Abroad are to have the same Litany on Saturdays before the Vigil service. On the last Sundays before the Glorification, October 5/18 and 12/25, the Litany will follow the Liturgy. On Saturday October 18/31, the Litany will precede the Vigil.

Beginning September 14/27, a special petition will be added to the Liturgy during the Great Entrance:

The New Martyrs and Confessors of the Russian Church who have been slain or have died in terrible sufferings, in hope of the resurrection and eternal life - may the Lord God bless and give repose in His Kingdom, Always, now and ever, and unto the ages of ages. Amen.

On the day the Council of Bishops opens, October 5/18, following the Liturgy, a molieben will be held which will include a special prayer of entreaty that God might "aid the work of the Sober, and grant that the crown of this work, the Glorification of the New Martyrs and Confessors of Russia, may be speedily performed by the power of Thine All-Holy Spirit, that they may be intercessors for us and for our people." At the end of the molieben the eternal memory of all the New Martyrs and New Confessors of the Russian Church will be proclaimed followed by the singing of "Many Years" to the first hierarch of our Church, to the ruling Bishop, and to the entire Council of Bishops. (Orthodox Way, June 28, 1981)